Lessons from failure . . Musings from the squared circle 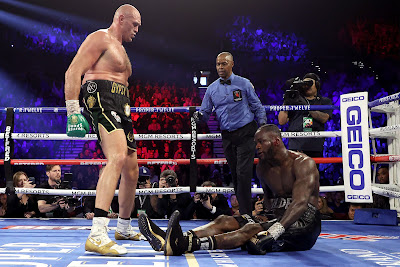 Much of the boxing community these days has gone gung-ho after #WilderFury2. It has been a cracker of a fight. Fury bullied the bully and emerged as the new WBC heavyweight champion. It was a shocking defeat; all the more so because of how comprehensive it was. Fury outclassed, outmuscled and outboxed WIlder in all departments and in every round. By the sixth, Wilder was wobbly, bleeding from the ear and mouth and had no answer to the flurry of combinations that Fury seemed to be cooking up at will. Finally, Wilder's corner threw in the towel around a minute into round 7. I could go on and on about tactics that Fury employed and analyse the technicalities of the fight itself; but that's not the point of this post. What was interesting came after. They say you get to know a man when he's really down . . they say the true test of your character is not how you parade yourself on your best days but how you comport yourself on your worst. And boy did we get to know Wilder!

In his immediate reaction post the fight, Wilder said he didn't want to make excuses but that his legs were "weak coming in" and that he had a lot of things happening before the fight . . not to make excuses mind you! He then disappeared and did not attend the post fight press conference. A day after the fight he released a statement that his team should not have thrown in the towel and should have let him "go out on his shield". He blamed Mark Breland for this decision and contemplated firing him. Day 2 and Wilder spoke in an interview about how his legs were wobbly because his ring-walk costume was too heavy and that weakened his legs! He actually blamed his costume for his wobbly legs! Finally Wilder took to Twitter and released the most ridiculous statement of all, looking down at the camera and talking about how "the king is still the king" and that his fans should stick by him in this phase. Every sentence from Wilder's mouth was reminiscent of a pouting bully threatening repercussions because his toy was taken away.  It was a sight to see! How the mighty crumble. A few days ago Wilder was the most feared fighter on the planet. That explosive right cross was every boxer's nightmare. He had the highest KO-2-win ratio of any boxer around. Cut to this video where he came across as sulking and bratty.

Rewind to Jun 2019 - another champion; another shock defeat. Anthony Joshua was then the reigning WBO, WBA, IBO and IBF heavyweight champion with an unblemished record of 22 fights and 0 losses (much like Wilder who had zero losses before Wilder-Fury-2). He was scheduled to fight Jarrell "Big Baby" Miller in New York. Unfortunately, Miller was forced to pull out due to some shady doping results and Andy Ruiz Jr stepped in. On fight night, the unthinkable happened! Ruiz Jr beat Joshua! It a shock defeat; compared to Buster Douglas' upset victory over Mike Tyson. Nobody had imagined it could happen. Joshua's reaction however; was TOTALLY different from Wilder's rants and tantrums today. Post fight, Joshua made no excuses, just congratulated Andy on his victory, graciously attended the presser and left. No statements assigning blame, no excuses. His only tweet that night was a simple congratulatory tweet to the victor.

Wilder's own reaction to Joshua's defeat was cringe-worthy too! He talked smack about Joshua; did not give him the respect of a fighter and even called him a substandard boxer. He said he wasn't surprised by Joshua's defeat, that he was wrong to ask for an immediate rematch (which Wilder is himself doing now) and that the rematch would go the same way. In contrast, Joshua has not spoken at all about the Wilder loss!

Aside from boxing tactics and analysis thereof, the sport reveals a lot before and after the fight too. Behind the blood and the glory, behind the pomp and the pagaentry are real men and women who can display the best within them . . and the worst! While Joshua might have tons of opportunities in terms of his game and his technique, while he may or may not win the mandatory fight coming up against Kubrat Pulev in Jun 2020. If he does, he may or may not figure out Fury's tell behind his classic "feint" . . . all probabilities too complex to ponder on. What is certain though, is that apart from actually winning the belts, he's displayed the hallmarks of a champion outside the ring too . . by staying classy. No trash-talk, no notoriety like McGregor, no wierd antics like Fury, no arrogance like Wilder. His tagline? #cleanheartswin! A refreshing change from all the bad-boy personas that seem to be so popular these days. And more importantly, vibes and lessons we can all learn from -

"Don't let success go to your head or failure get to your heart".
Posted by Virag Padalkar at 07:10