“Our lives are not our own. From womb to tomb, we are bound to others. Past and present. And by each crime, and every kindness, we birth our future”

This is what Sonmi-451 says during her broadcast to humanity; revealing to the world the injustice being meted out to “Fabricants” in Neo-Seoul. Thus begins the saga that is Cloud Atlas. The only words to describe this movie are “Grand Vision”. The complexity of the movie ensure that you MUST watch the movie at-least twice to start following this grand vision. I saw this movie in a multiplex called “E-Square” along University Road in Pune. I dropped off my girlfriend home and on the drive back to my own home, the story started dawning on me. Small scenes flashed before my eyes as if giving me glimpses of what the directors wanted to achieve. Half-way home, I stopped. I had to. I turned around, went back to the multiplex and booked myself another show the same day. I saw the movie two more times after that and then I decided to pen this tribute to a movie that had a deep impact on me.

Each story follows a similar theme. In some small way, the protagonist has helped (directly or indirectly) the guiding hand. In return for this act of kindness, the guiding hand helps the protagonist achieve his/her goals. Through each story, one document is carried forward to the next story which is a remnant and a symbol of this act of kindness. Across 500 years each act of kindness has a rippling effect ultimately leading to Zachry’s salvation from Earth to another planet with his partner – Meronym. Here’s how it happens – 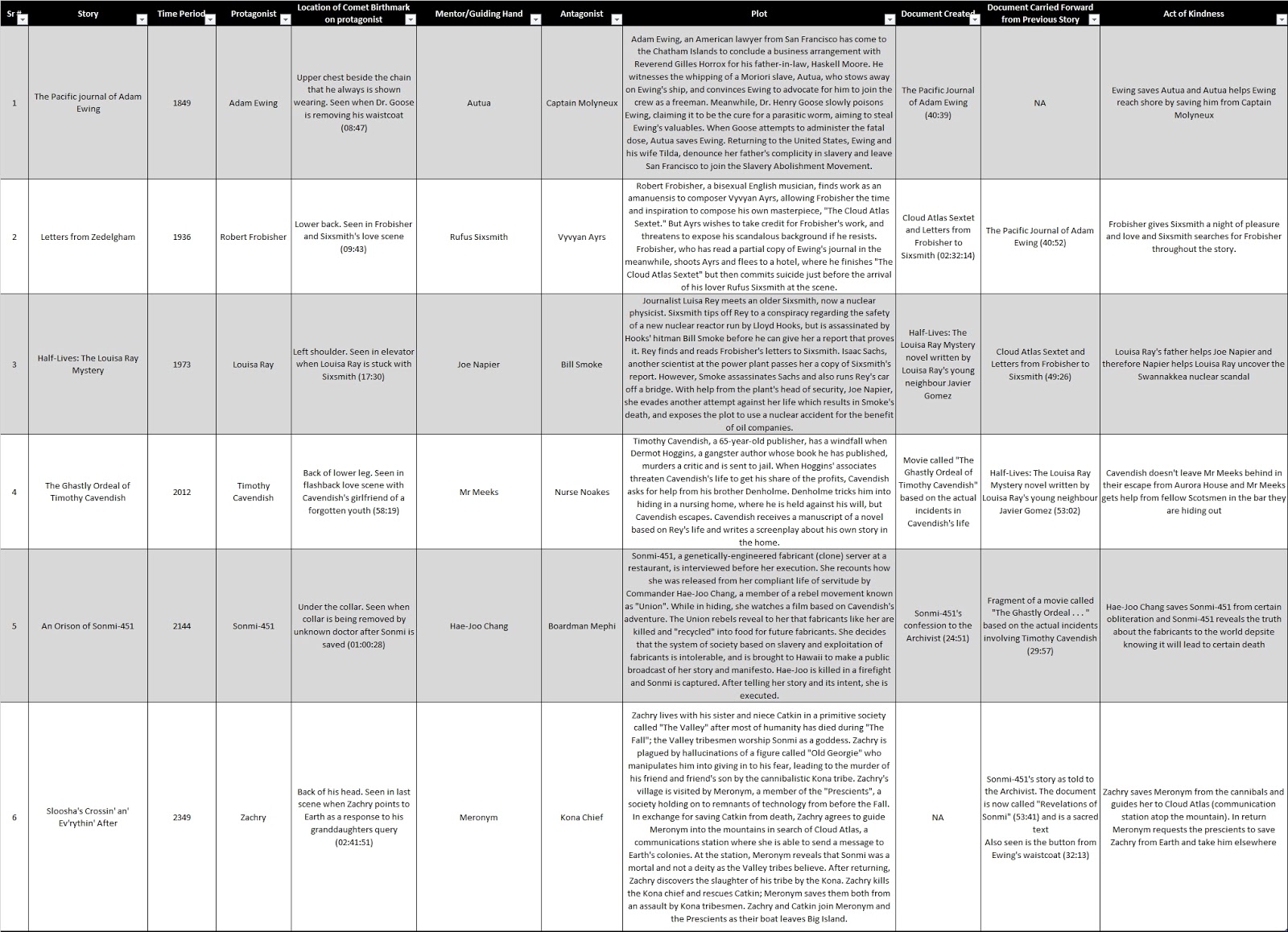 The sheer audacity of the vision that the directors had tried to encapsulate in approximately 2 hours 50 minutes had me spell-bound; not just the first time or the second time that I saw the movie, but even after seeing it for the third time. The direction is immaculate. Even a slight loophole would have thrown the entire story to the dogs. Even a slight scene not in keeping with the seriousness of the movie would have rendered it laughable and irrelevant. The acting is another gem. Tom Hanks has outdone himself in 6 roles, each as varied as the sun and the moon. From a Brit author to a post-apocalyptic villager the depth and range that he brings to all roles is fascinating. In fact, I realized that the innkeeper in the second story is Tom Hanks when I saw the movie for the third time. Hugo Weaving too has shown similar skill and range. Right from the role of Nurse Noakes to ol’ Georgie; he has displayed histrionic skills which had hitherto gone unnoticed; especially given the wooden nature of his character in the Matrix. Halle Berry too does a good job in all her roles. Especially well done is her portrayal of Loiusa Ray in which she brings believability to the role of a young journalist trying to justify the chip on her shoulder, left there by her famous father; Lester Ray. But what takes the cake in the movie for me is the music. The haunting background score during Sonmi-451’s speech gave me a vision of a better humanity. A humanity that justifies the concept of evolution; that validates the fact that humans are at the top of the evolutionary tree with a superior intellect.

I am a misanthrope by nature. But for a small amount of time the movie showed me a sliver of a silver lining for humanity. As long as art like this is created, there is still hope. Hope that entertainment is not just for the mindless and the moronic but for the intelligent and the discerning. Hope that it is not old-fashioned to be entertained by thought-provoking works of art. Hope that we can still turn the current trend of degeneration and laziness around and uphold values like excellence and effort in all fields (art being the one I am speaking of in this article). But even more than the quality of the movie, what gave me hope was the plot and the story. Hope that though in today’s society evil far outnumbers the good, each small act of kindness MIGHT have that rippling effect. Each small act of kindness MIGHT just be reciprocated in some small way. Towards the end of the movie, Ewing’s father in law berates Ewing for his decision to work for slavery abolishment and asks him, “ . . . . For what? No matter what you do, you will never amount to anything more than a single drop in a limitless ocean”. Ewing’s response underlines very nicely this feeling of hope, “What is an ocean but a multitude of drops”. Let us hope that such works of art are cherished and propogated through generations. Though the movie did not get even a single Oscar nomination, I know that it shall have much more of an impact than most other Oscar winning movies I have seen or shall see. Let us hope that humanity does indeed justify its place at the top of the evolutionary tree.
Posted by Virag Padalkar at 13:48