I recently got tired of Ubuntu and wanted to really experiment with some form of Linux where I did not have to constantly reinstall the Gnome desktop environment with each install. For various reasons, ubuntu had gotten tiresome. I experimented with LinuxMint, OpenSuse and then installed Fedora. Here I got the good old Gnome 3.6 interface that I had become so familiar with. And I got the interface with all its kinks ironed out. I was so happy for the first fifteen minutes till I realised that the Fedora Gnome distribution had problems of its own. For starters, it did not have the Ubuntu software centre which made installation of applications so easy. In Ubuntu, all I needed to do was to go to the software centre, look at the nice picture of the application running its full glory like some being with artificial intelligence that was about to make my life so easy that I was going to think I was living in the neanderthal age before installing it; and then watch the progress bar do its work. Essentially, Ubuntu had made installation of applications in Linux as easy (if not easier) than Windows.

Here, I actually did feel like I was in the neanderthal age where I could not find a place to search cool apps. All I could see was a stingy “Software Install” application with software names that made my blood curdle. For e.g -
All I could think of was - W**t the f**k!!

After some time spent in a daze wondering what to do, common sense took over and I started to read up about the Fedora Project in more detail. When I was a kid, I did remember that Fedora was maintained by Red Hat and the name RPM had stuck in my memory. I read the Fedora RPM guide and things became clearer. Apparently, I had to add software into my repository so that I could install it. So far so good. I attempted to do that using the settings tab in the “Software Install” application. Once I checked a few software repositories, I went on to install the basic necessities of life; viz - Google Chrome, Dropbox and VLC. Here I discovered a new irritant; Fedora issues a public key to all valid RPM files. No valid key, no installation. I kept getting an error as follows -

Here, I was on the point of giving up. But then I remembered Kung Fu Panda; that eternal classic! I remembered the one message that Master Shifu gave that will stay in the annals of philosophy as the guiding light for all geeks that encounter an error message -

There is no secret ingredient

And from there, I steeled myself. I read through what an RPM archive is, I found out about YUM (that’s not the Indian messenger of death; it’s Fedora’s equivalent) and I found out how to waive public key checks for any software I install. By the end of my autodidactic efforts, I was pretty much installing everything from the command line. 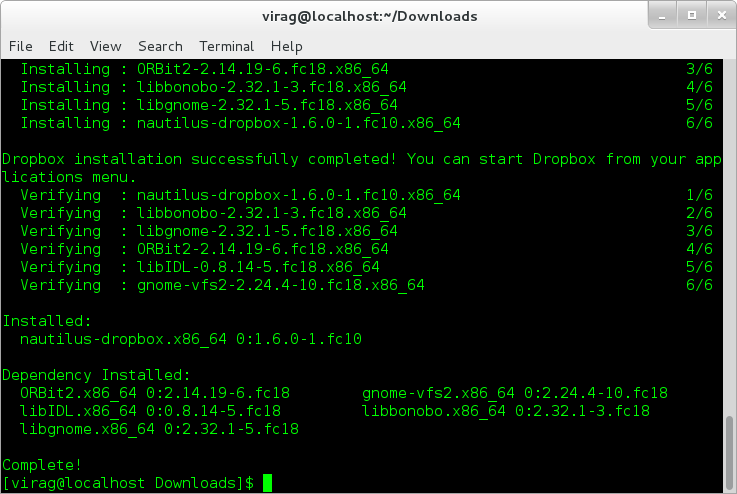 I cannot begin to decribe my feelings on watching that simple word the shell threw at me - "Complete!" It had the pride of accomplishment mixed in it. It had the fulfillment of success, even more than the welcome message filled with inane trivia at the end of the installation of any Windows application.