It had been a pretty hectic week. Due to a rather fortuitous chain of events, I was afforded the opportunity to go on a morning walk in the park with my mother. Now before you begin sniggering and deriding me about a grown 27 year old man taking a walk in the park with his mother (as I initially was), you might want to read on to relate to the title in big block letters above.

We travelled to the “Pu La Udyan” just as light was spreading across the sleepy city. As we turned into the drive-way on my trusty steed the noise of the traffic outside slowly started to recede into the background. As we parked and started walking towards the garden, the change was apparent. The snarl of traffic was replaced by the chirping of birds. The shout of early-morning vendors was replaced by the crunch of our own footfalls on the gravel walkway towards the ticket booth. And the cacophony of people was replaced by the soft, sweet sound of our own breathing - in our own ears. In deference to these, I switched my phone to silent mode. We bought the tickets and stepped inside. Here was my first small pleasure of the day. I was worried about how my mother would keep pace with me. I had decided that I would walk slowly and let her choose the pace. Well, that did happen – but the other way around. She set up a brisk pace right from the word go and I had to scurry along to keep up with her. 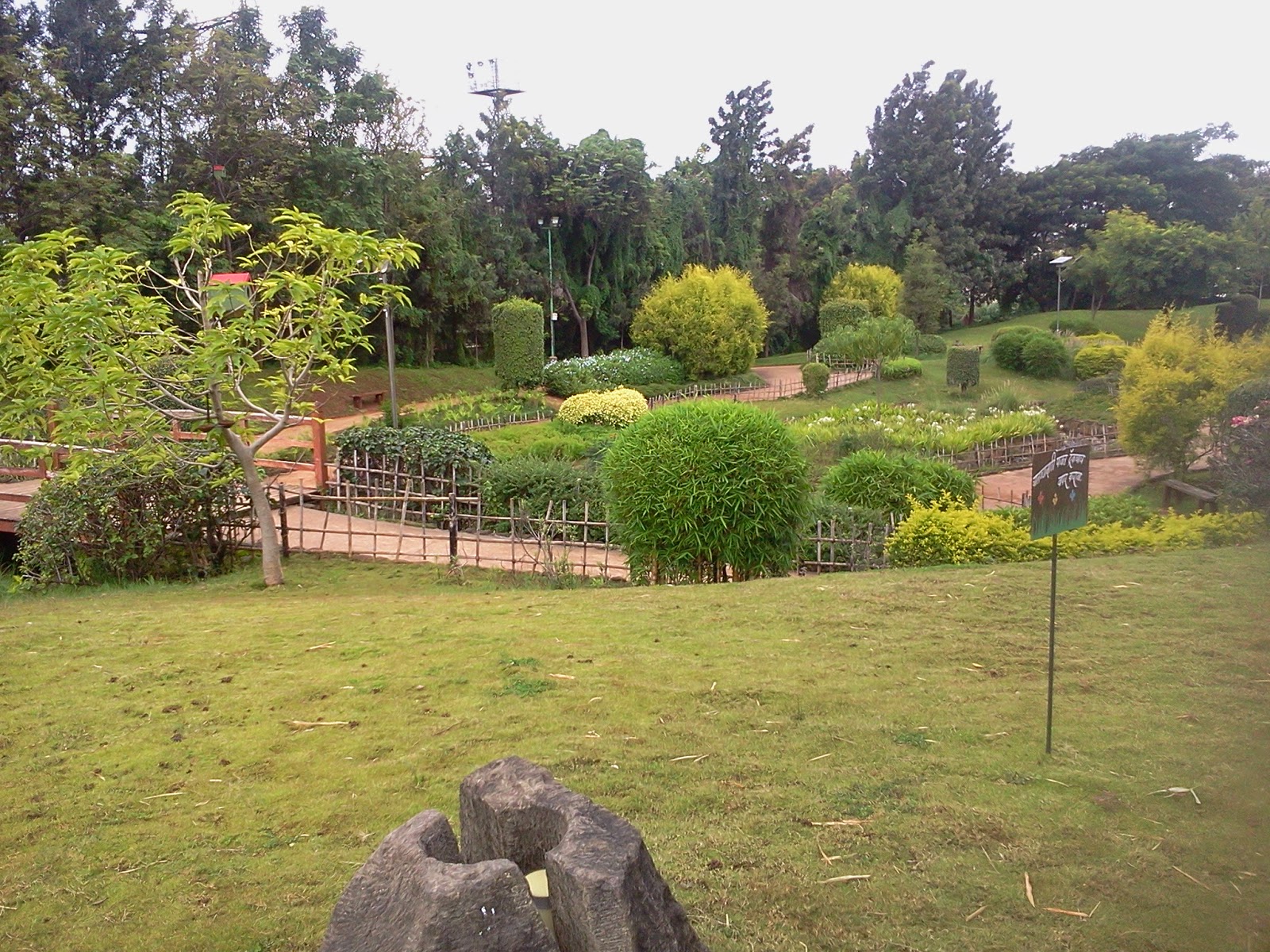 The park is constructed on Japanese landscaping principles. Though I am not too knowledgeable about this topic, what was apparent to me was that control and detail were two important principles used. Each hedge was in its place, each tree was shaped just right. Each errant leaf clipped and maintained. A walk-way around the park gives the public exercise and the beautiful landscape some mental relaxation. Since the first lap we set on was pretty brisk, I did not have much chance to register the beauty. Towards the southern end of the park; mid-way through the first lap we came across a small beautifully constructed waterfall. Since my mother was pretty intent on the brisk walking bit, the sound of the water made a fleeting impression on my auditory canal before we zoomed ahead. The walk-way arched through a series of small landscapes, up through a small hillock which I grudgingly climbed, over a meandering stream and finally to the entrance where we began. 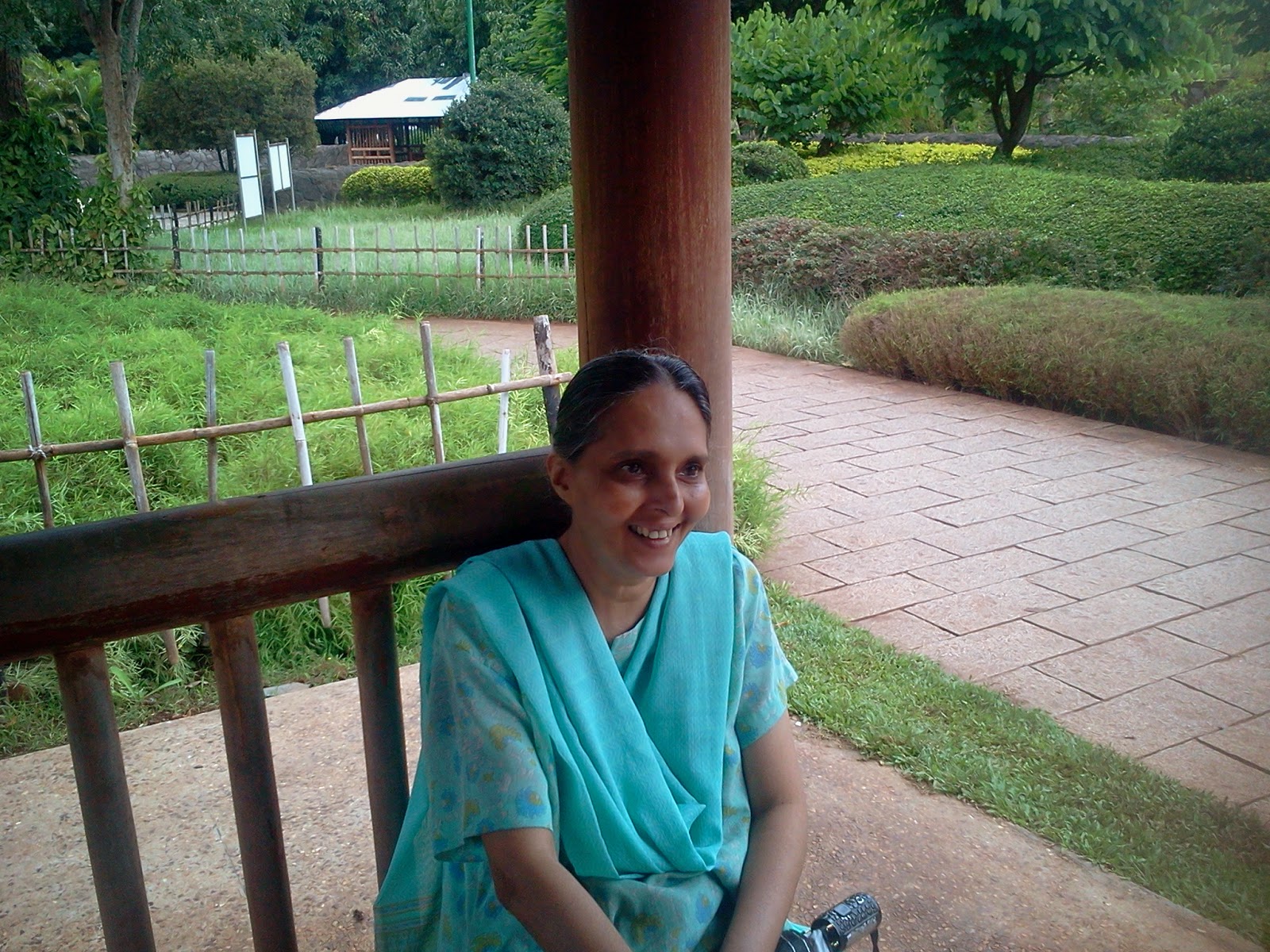 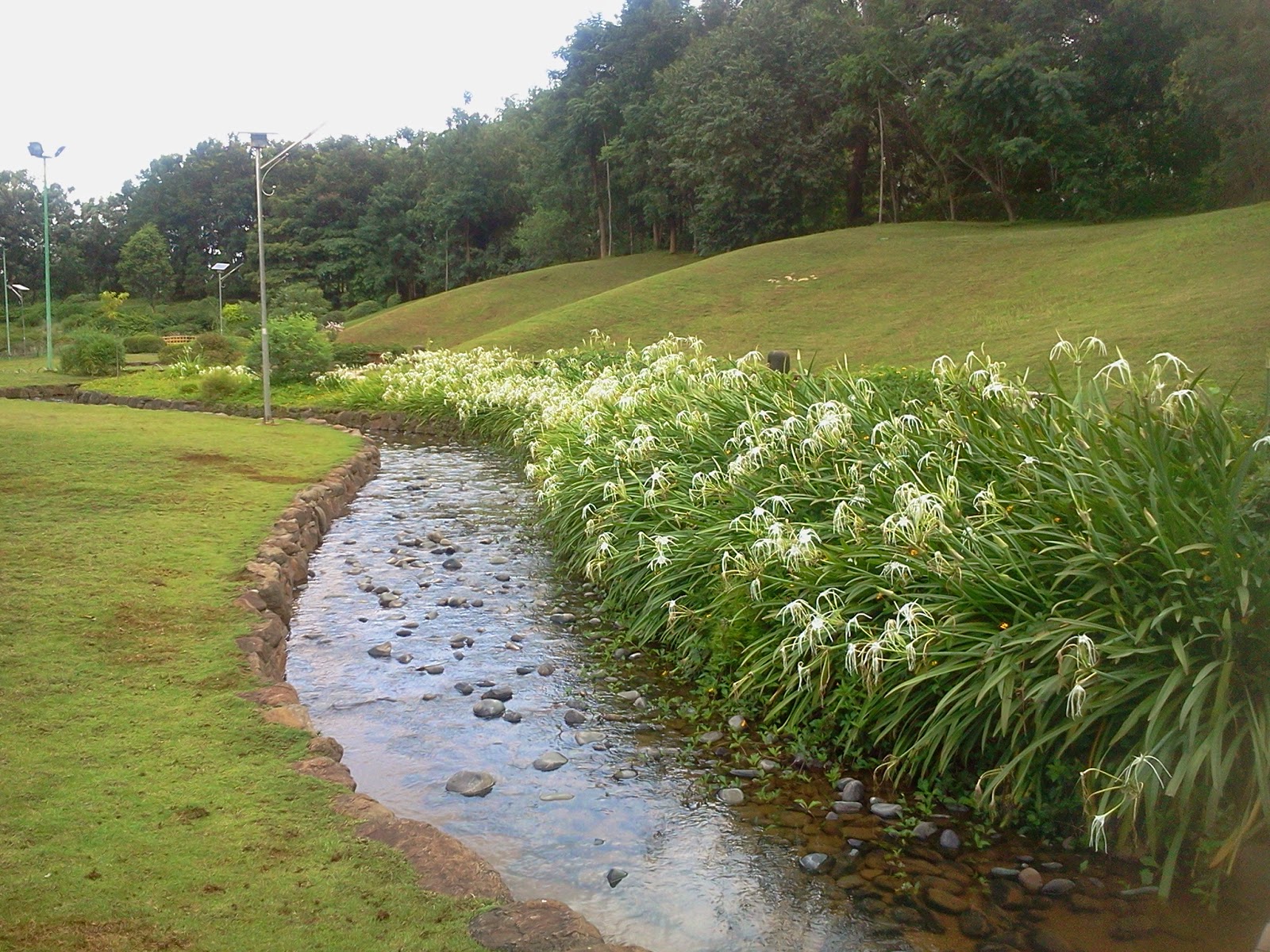 The second lap was much more relaxed. The first had already put me in pleasant mood. This time, I was observing everything around me in much greater detail.

As we rounded the curve towards the waterfall again, my mother suggested we take a halt. A small bench was constructed right in front of the waterfall. We sat down. I now noticed that the waterfall was constructed in 2 levels. The water came from the left and moved towards the right in 2 steps. Each step was bounded by small, shapely rocks. Foliage and shrubbery bordered the waterfall. The water kissed the sides of the small shrubs as it worked itself down to the ground and flowed to become a stream that meandered its way through the park. Sort of the life-blood of the park as it was. The small green shrubs in turn seemed to bend down to greet these loving kisses given by the gurgling water. We didn’t talk. We just sat there in complete silence for a few minutes listening to the water tell us how it intended to go to the other end of the park. It was excited, it was optimistic, and it was in motion. Idyllic and energetic at the same time. We didn’t need conversation to be at peace. The sky was turning a lovely shade of pink. The day had started. It was a good start, a promising and optimistic start. I felt just like the water; raring to go. 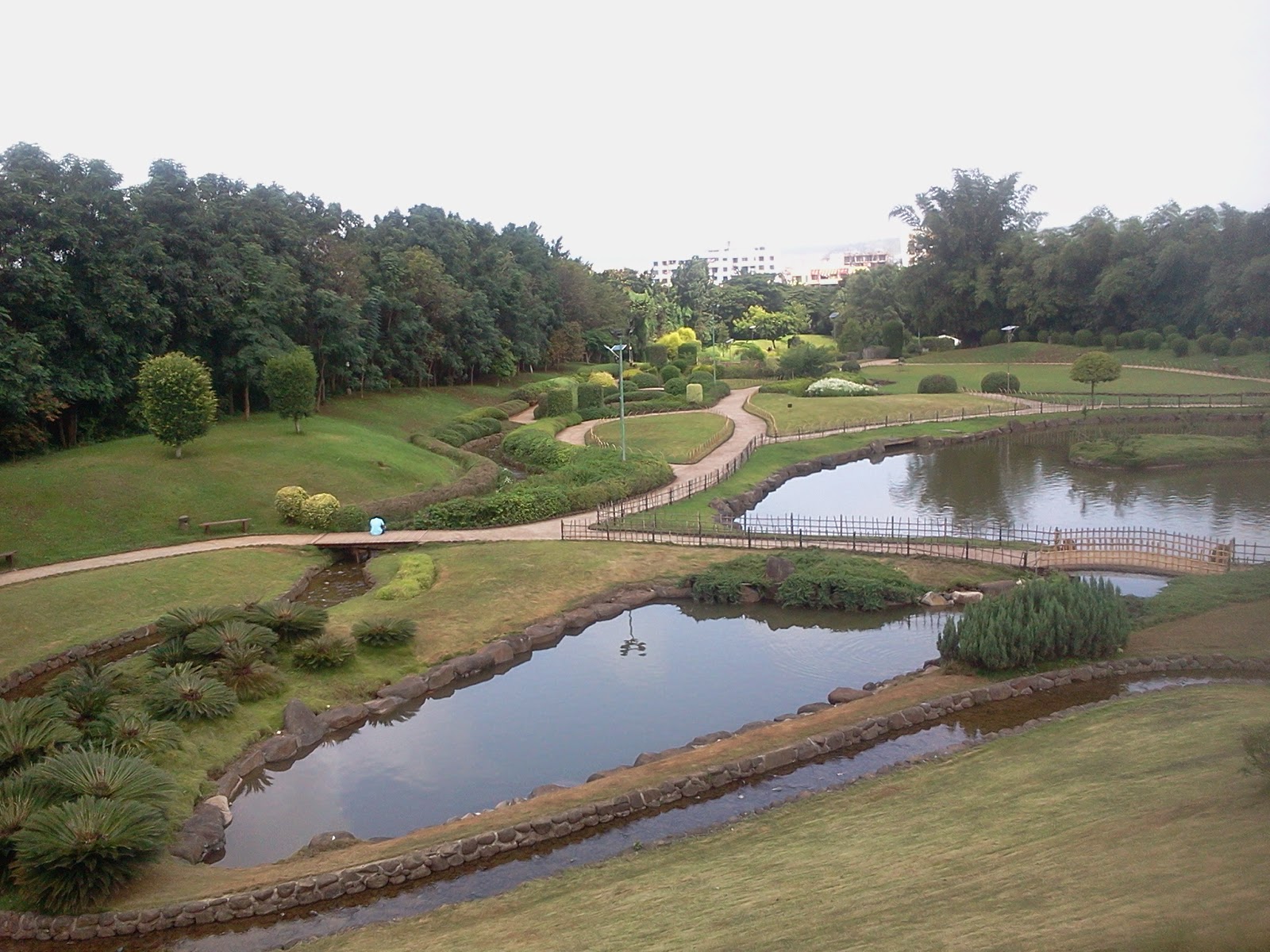 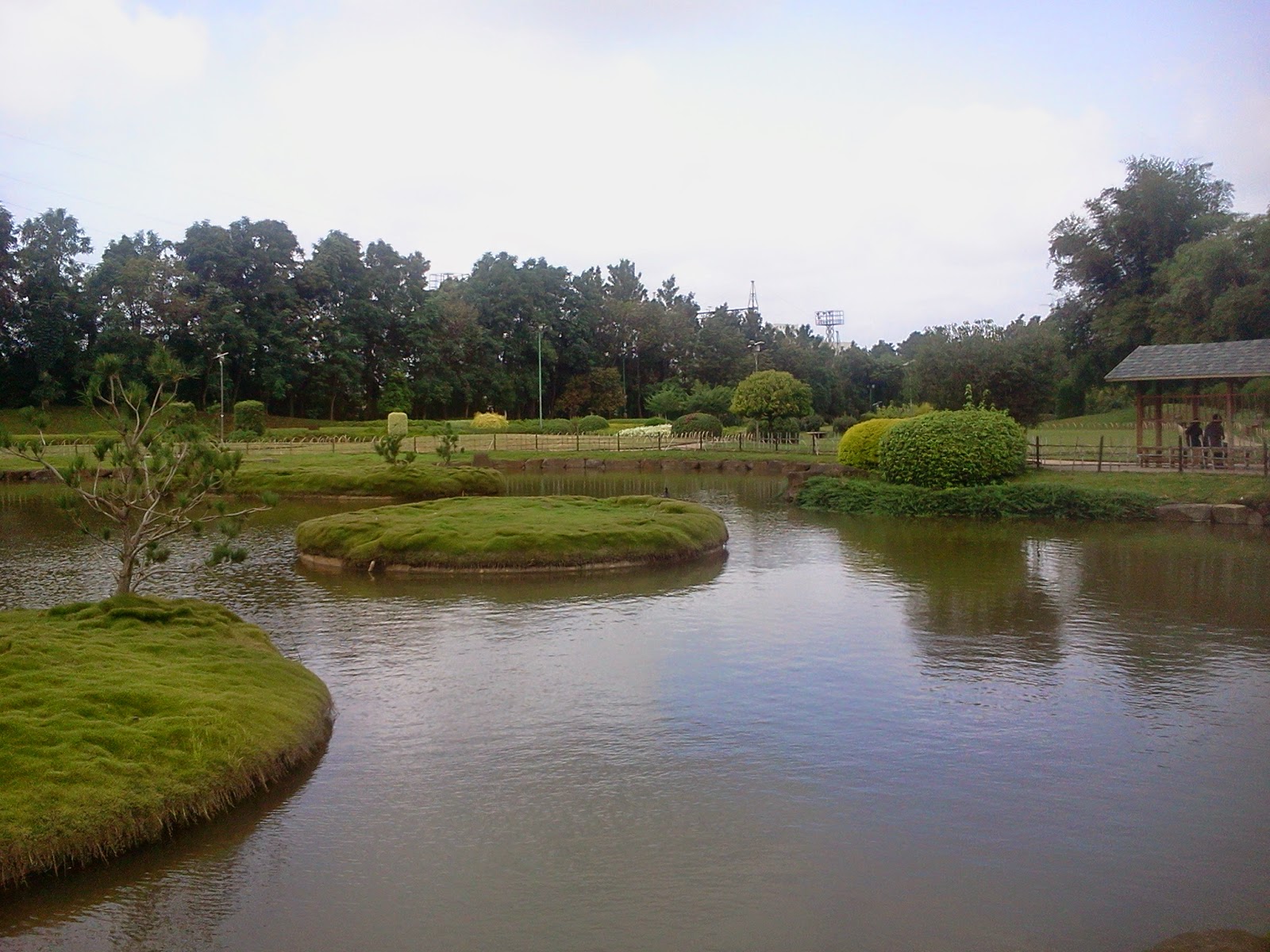 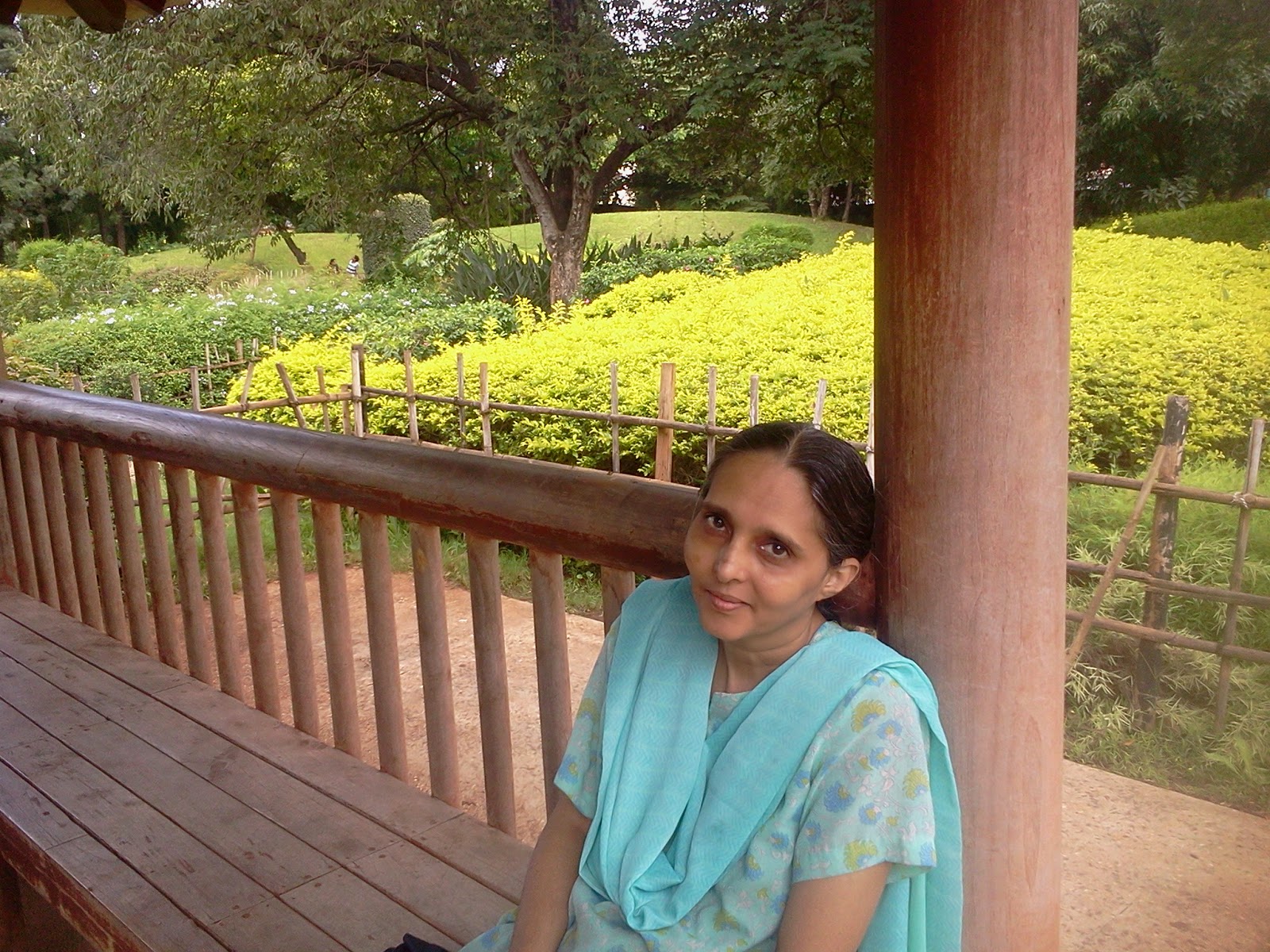 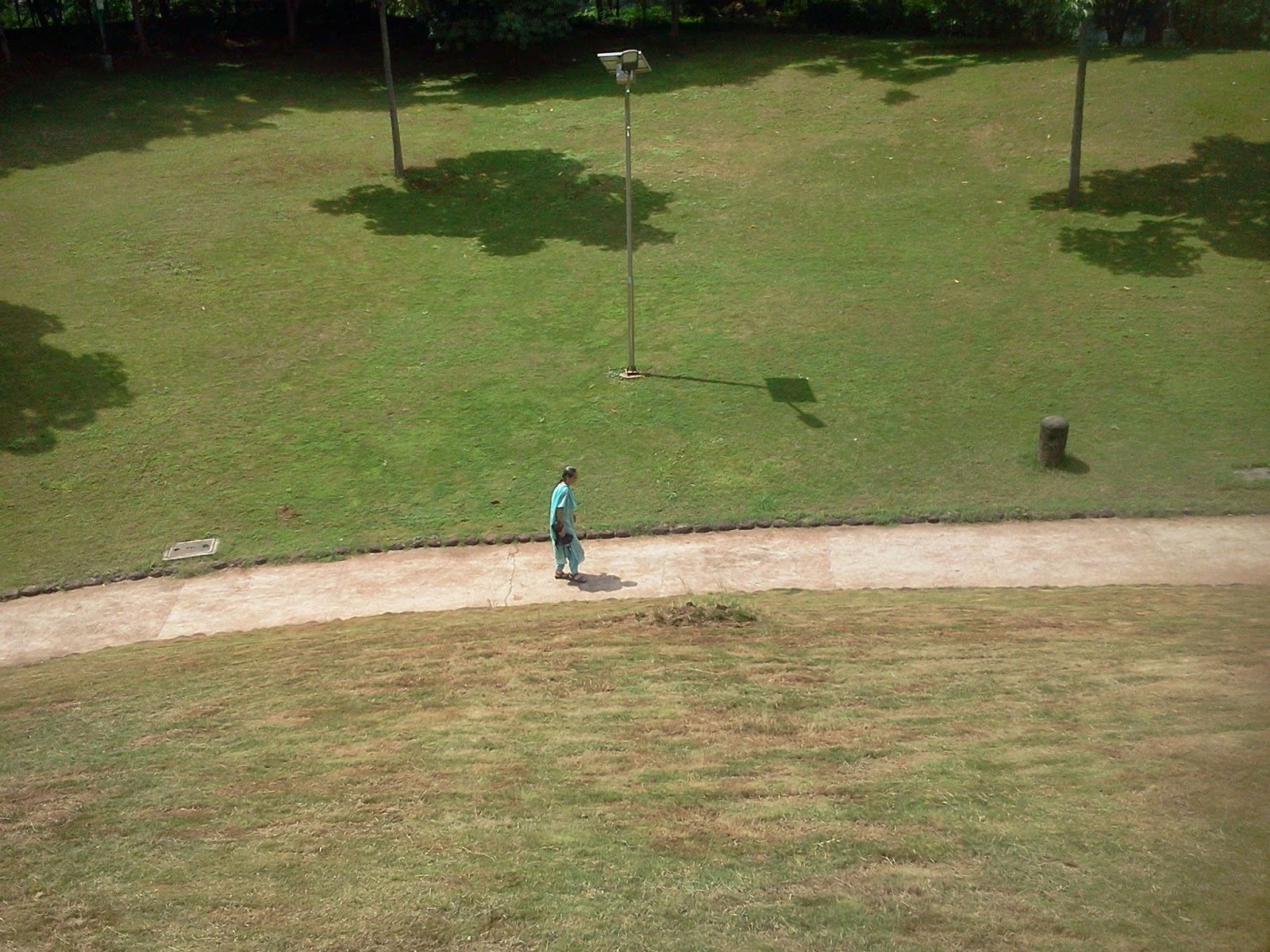 We got up and resumed the walk before the soporific effect of the water’s sound took hold. The sudden change in tempo had put me in reflexive mood and I watched my mother walk ahead of me, intent on the exercise. Though our objectives in coming to the park were different, I think we met them nevertheless. I let her walk ahead and focused on the beauty. I now noticed things that I had overlooked in the first lap. I stopped by the side of the small hillock (this time I did not climb it) and noticed that it was perfectly triangular when viewed in profile. The grass on the sides of the hillock was shaped in gently undulating spheres. Like the inverted surface of a golf ball. A lone man was standing on top stretching his arms. From my point of view beneath him, he looked strangely like a bird about to take flight from the top of the hillock. I smiled to myself at this crazy thought and moved on. A small stretch of grass by the side of the stream caught my attention. The entire patch of grass was a uninterrupted range, apart from one small white flower. It looked oddly out of place. Just one white flower amongst a riot of green. What must it feel to always stand out in the crowd? Always be the one who is looked at because of the contrast. Always be the one singled out for the difference. I wondered. As I walked by the side of the stream, I noticed small shelters were constructed for people to sit and rest. I saw a couple of college kids with a stack of books in front of them. I slowed down. They were involved in a lengthy discussion of their respective syllabi from what I could make out. Fresh young minds embarking on a journey of knowledge hopefully. I suddenly realised I was eavesdropping and moved on. When I came to the part of the walk-way which crossed the stream, I stopped again and looked around. It suddenly struck me that there was a plethora of green shades to look at. Not one plant was the same colour as the other. It was as if each plant, shrub and tree had decided to be a different shade of green. From a fresh, wet, almost-yellow bright green to a dark, sombre and forbidding green. It was a treat for sore eyes. I revelled in the pleasant weather and the beautiful landscape spreading across my vision. I let go of all thoughts of work, existing problems, potential problems, non-existent problems - everything. It was beautiful. The green seemed to compliment my mood of peace. It enveloped me. It comforted me and assured me.

I noticed that my mother had finished her lap and was sitting down on another bench near the entrance. I hurried over. We sat and had a simple conversation for a while. One that I rarely have with my parents anymore. It wasn’t a discussion of some grand idea or it wasn’t a foray into some intellectual topic. It was just a plain conversation; Simple and yet effective. I did not need to unburden myself of anything - the burden was already gone. My mother and Mother Nature had jointly taken care of that. A shade of green and a simple conversation was all that was needed. As I got up I realized that we work hard and slave to earn money for some ideal concept of great pleasure. We search high and low for expensive restaurants, fashionable clothes or places to go where we can have fun. We spend so much money and effort looking for pleasure in order to forget our problems. All I needed to do was take my mother out for a walk.

Small pleasures? I think not.
Posted by Virag Padalkar at 20:48